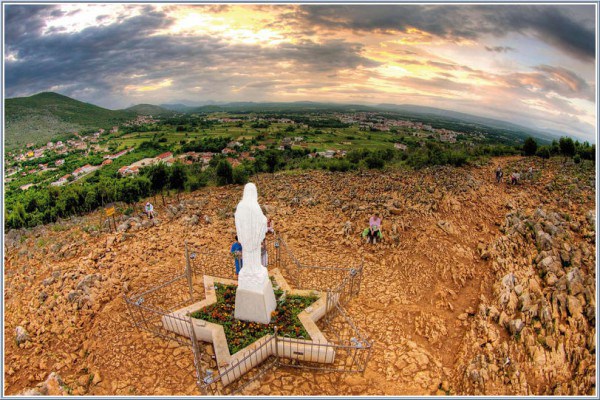 On June 24 1981 ……Mount Podbrdo is the name of the “mountain” that Our Lady first appeared to the visionaries of Medjugorje. After the apparitions began, it became known as Apparition Hill. It is a steep and rock-strewn path that ascends to the actual location where the Virgin Mary first appeared. Tens of millions have climbed this mountain, pilgrims from all over the world, and they tell of experiences that are deeply personal, intimate and life changing through the encounters they have had in prayer with The Theotokos, the Queen of Peace, on this barren mountainside. It was on Apparition Hill where Our Lady first began inviting the world, through the visionaries and the village of Medjugorje, to respond to Her call. There have been literally thousands of apparitions of Our Lady on this mountain—apparitions that continue even to this day.