Apparitions in the Orthodox Church

The Appearance of the Virgin Mary in the Orthodox tradition

The Orthodox Church has many sacred shrines and churches dedicated to the appearance of the Blessed Virgin Mary as well as many icons that have been attributed to miraculous healings or have shed tears. The following are just a few of the most traditionally celebrated appearances of the Mother of God (Constantinople, Greece, Russia and Lebanon). 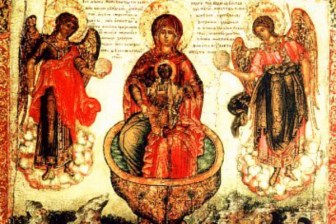 The Life Giving Spring – A church was erected in Constantinople by the Byzantine Emperor Leo I after hearing the voice of the Virgin Mary and witnessing miraculous healings. On April 4, 450, as Leo was passing by the grove, he came across a blind man who had become lost. Leo took pity on him, led him to the pathway, seated him in the shade and began to search for water to give the thirsty man. Leo heard a voice say to him, “Do not trouble yourself, Leo, to look for water elsewhere, it is right here!” Looking about, he could see no one, and neither could he see any water. Then he heard the voice again. The Virgin instructed Leo to take mud from the nearby stream and put it on the eyes of the blind man. When the blind man’s eyes were anointed, he regained his sight. Many miracles were performed through the intercession of the Theotokos including resurrections from the dead. This site was given the name “The Life-Giving Spring”.

Panagia of Tinos (Greece) “She is of Great Grace” 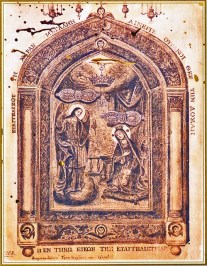 “The All-Holy Bringer of Good News“, and Μεγαλόχαρη της Τήνου, Megalócharē tēs Tēnou, lit. “She of Great Grace”) is the major Marian shrine in Greece and is located in the town of Tinos on the island of Tinos.

The complex is built around a miraculous icon which according to tradition was found after the Virgin appeared to the nun Pelagia and revealed to her the place where the icon was buried. The icon is widely believed to be the source of numerous miracles. It is by now almost completely encased in silver, gold, and jewels, and is commonly referred to as the “Megalócharē” (“[She of] Great Grace”) or simply the “Chárē Tēs” (“Her Grace”). By extension the church is often called the same, and is considered a protectress of seafarers and healer of the infirm. Many miraculous healings take place here and thousands go on pilgrimage to be cured and to seek blessings from the Virgin Mary on the island of Tinos. 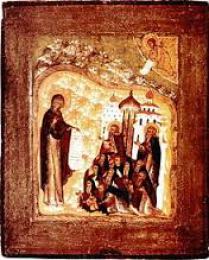 According to Orthodox tradition, when the prince was moving from Vyshgorod to the Suzdal Principality in 1155, he took the Wonderworking Icon of the Theotokos from the Mezhyhirskyi Monastery in Vyshgorod with him, and served molebens, or service of supplication, in front of it every day. About 7 miles from the city of Vladimir, as they approached the shore of the Klyazma River, the horses carrying the icon suddenly stopped and would not move forward. After prayer, the prince went to his tent and there the Theotokos appeared to him in a dream-like vision holding a scroll in her right hand, and commanded him to place her icon in the city of Vladimir and to build a temple (church) and monastery on the place of the vision. (Ever since this time, that icon has been known as Our Lady of Vladimir.) Prince Andrew did as he was told, and also commissioned the Bogolubsky Icon of the Theotokos.

Our Lady of Nourieh (Lebanon)

Saydet el Nourieh in Arabic, is a Marian shrine in Hamat, Lebanon. Nourieh is a derivative of the Arabic word, nour, meaning light. In English, the Marian shrine can be called, Our Lady of Light. 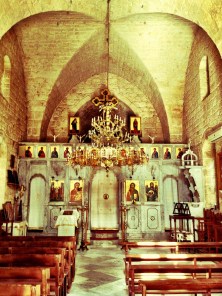 The story of Our Lady of Light shrine and monastery is celebrated throughout Lebanon, a country where Christianity has existed since Jesus first evangelized in Tyre and Sidon, and therefore, Lebanon is often considered part of the “Holy Land.” Some of the first Christian communities were set up in Lebanon during the time of the apostles.

It is believed that two sailors built the shrine in the 4th century. One winter night, on a very stormy sea, the two sailors found themselves in peril. They began praying, and the Virgin appeared to them as a light and guided them gently to the shore of Theoprosopon near modern day Chekka in North Lebanon. The grateful sailors carved a cave in the cliff and dedicated it to the Virgin Mary, and called the shrine, Our Lady of Light. A Greek Orthodox monastery was built in the 17th century. The miraculous icon of the Theotokos has been venerated for centuries for having glowed with light to attract wayward ships.

The shrine is a popular Christian pilgrimage site in Lebanon.